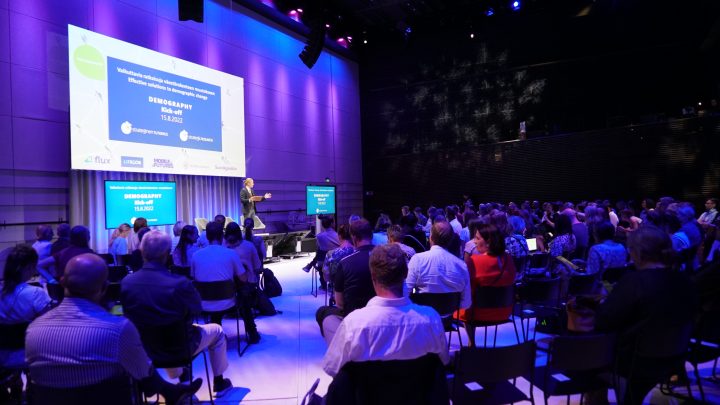 The Strategic Research Demography Programme kick-off brought together researchers and various stakeholders. The afternoon explored the causes and consequences of demographic change and sought solutions to the challenges it brings.

Finland’s population is ageing, the birth rate is declining and the working age population is decreasing. This has huge implications for the social and health care system, the pensions system, the economy, working life and social relations more generally.

These issues were explored in depth at the kick-off meeting of the Strategic Research Demography programme on August 15th 2022, in Musiikkitalo Helsinki. The programme’s projects explore the issue of demographic change and aim to produce concrete solutions to help influence and adapt to it.

“There is a need for research knowledge to more easily find its way onto the desks of decision-makers”, said Jouni Varanka, a negotiating official at the Prime Minister’s Office.

“You need to understand the reasons in order to make decisions.”

The declining birth rate is also a matter of inequality

The birth rate has been on the decline in Finland for a long time. Children are born later and in fewer numbers than before. In recent years, we have seen a short period of recovery, but now the numbers have turned down again.

The discussion emphasised that the birth rate is also a question of inequality: behind the average values lies a sharp polarisation. In Finland, infertility is most common among both women and men with low levels of education. Those who are well otherwise, often also find a spouse and have the desired number of children. Others may not.

“Those who have faith in the future and, for example, good social networks, are better able to have the number of children they want,” reflected Anna Rotkirch.

Mikko Myrskylä added that the birth rate can be influenced by the wide-ranging promotion of well-being.

“Merely supporting families with children is not enough, because those in the weakest position are not with a family. Supporting those at risk of exclusion can also promote birth rates.”

The number of people of working age is decreasing, but it is difficult for many groups to get a job

The most effective way to increase the number of people of working age is through immigration. However, Peter Kariuki from ETNO and the Ministry of Justice reminded us that even those who move for work do not come to Finland just to work. They bring their whole lives with them.

“Are we as a society ready to accept new people as part of the nation?”, Kariuki asked.

At the beginning of August, Minister of Social Affairs and Health Hanna Sarkkinen, proposed a quota for companies to hire people with disabilities. This would be a means by which employers can be required to hire people with only the partial ability to work.

The discussants however viewed coercion and the existence of mandatory quotas as poor ways to promote employment.

“We should change social structures in such a way that we promote the conditions to create different jobs for different people. We should be able to employ population groups with a low employment rate”, said Mikko Spolander.

In relation to working careers, the researchers pointed out two groups that should be particularly invested in future research: the partially disabled and young people from diverse backgrounds.

“Young people must be given the opportunity and ability to build the country in such a way that everyone can make their own life. There is no need for us to think about what kinds of limits will be set on the working life experience of the 2030s.”

he life expectancy of Finns has increased. Are the elderly seen as a resource or a burden?

“Today, we have a contradictory narrative: on the one hand, the extension of life is seen as a positive and aspirational thing, but on the other hand, the group of elderly people is seen as a challenge and a problem. Attitudes to age should be changed and a better understanding of the ageing process supported – if we want to live longer, we also have to accept the fact that old age often brings with it illnesses and a decline in functional capacity”, said Anni Lausvaara.

Mirkka Danielsbacka stated that social networks are of great importance to the well-being and activity of old age – and ultimately to how many healthy years of life an ageing person has left.

The discussants agreed that we often look too narrowly at what good old age consists of. We should be more prepared to ready ourselves for old age and to think about where we want to live and how to take care of social networks.

Socioeconomic differences are visible here as well. The well-off in society have better social networks and resources to prepare for old age, for example with housing arrangements, Lasse Tarkiainen reminds us.

A clear need for more information has thus emerged: Antti Parpo hoped to get information about what the elderly themselves desire. What is their vision of a good life? What kind of housing and what kind of services do they want? The questions will be answered, as the NetResilience and SustAgeable projects also investigate the wishes of the elderly in their research.

Programme director Susan Kuivalainen stressed that the earlier researchers exchange ideas with stakeholders, the more effective their research will be. She thus invited stakeholders to participate in the discussion and encouraged them to actively engage with the projects.

The Demography programme will continue to promote such close collaborations, with events organised by the projects themselves as well as a series of workshops that will bring researchers and stakeholders together to generate knowledge.

Watch the recording of the event (In Finnish)

Get to know the STN DEMOGRAPHY programme’s projects: